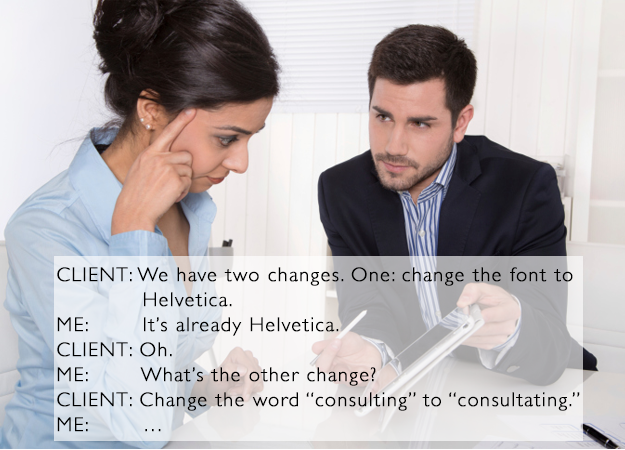 Every designer has gone through the following scenario at some point. You get a new design client for some work. It may be for an app, a website, business collateral or a logo/branding overhaul. The work is pretty straightforward after you get to know the client a little bit and understand the values of the company or business entity, and what they are looking for. You grind away on the project, and finish with what you think is close to a final product. Then comes the feedback loop. For me this includes asking designer friends what they think (provided I haven’t had to sign an NDA) as well as my colleagues. The most important feedback of all comes from the design client though. After all, it’s them who’s lining your pockets. This is where the trouble begins. Despite general positive feedback from others, they aren’t happy with what you’ve done. It’s frustrating, but it’s part of the job, and it’s up to you to fix it. But how much feedback is too much? How far is too far when it comes to criticism and input? As designers, we live and die by our portfolios, so it’s important to know how to recognize a bad design client and cut ties. Here are some of the more obvious character flaws.

You’ll always come across these people who are set in their ways. They refuse to be open about the most minute changes such as a color swap or font replacement despite delineating a design plan that clearly indicated such changes would be necessary. They often are the type to hover over your shoulder throughout a project, making sure everything is done exactly as they say and usually not accepting of new ideas or creative solutions. In order for a project to be successful, both the designer and client need to be open to compromise. If your client comes across as closed minded it may be time to pull the plug because they’re certainly not someone you want to work with.

I cannot count the number of times it’s been suggested to me by friends and potential clients alike to do something for free because “it’s just art,” or “it’s just design.” I spent the same amount of time time as everyone else learning the principles and practices of my field so that I could provide a financial means to live my life. To have it discounted by anyone is offensive to me and it should be to other designers as well. A disrespectful design client often sees themselves above you and can be condescending. Don’t work with these people.

Bad design clients often believe that once they detail the scope of the project, the entirety of its responsibility falls on you, the designer. They refuse to become involved until the very end and often tell you things like, “I trust you,” and “Just take care of it and we’ll review when you’re finished.” No. No. NO. Designers require constant feedback on the process to make sure there is no time wasted on something that will eventually be scrapped. Explaining these points to a client usually results in a mutual understanding with them being willing to play their part, but there will always be the few that are too busy to give you their time.

Part of designing is being open to criticism at all times. It’s something we learn early on in our careers and eventually learn to utilize to inform and mold our decisions and design styles. That being said, it should be obvious that this same level of maturity and ability to take criticism is expected of any professional. If a design client can’t handle criticism it’s a red flag warning of a bad client. Drawing from the last two points, often times design clients overlook the fact that designers are experts in their field and utilize their artistic expertise to solve problems just like anyone else. That being the case, the same level of deference should be given to a designer’s suggestions as someone would give a lawyer for their council.

For hilarious and horrible real life examples of what it’s like working with a bad design client please visit clientsfromhell.net/