MOVING ISN’T SUPPOSED TO BE FUN, BUT IT’S EVEN LESS SO WHEN IT EXEMPLIFIES WHAT SHOULDN’T HAPPEN WITH MARKETING. 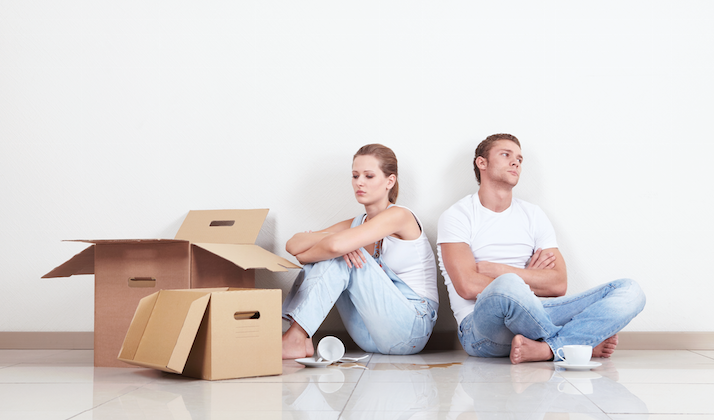 Straight out of the gates let me tell you that this week’s  post is going to be more of a rant and reflection on some of the things I’ve talked about of the last three weeks rather that a post in its own right. Over the last 3 days I’ve lived out a nightmare that most people over the age of 21 might be familiar with: moving. Moving is never fun. Either you, A, have to pack everything up yourself and coerce/bride your friends to help you with pizza and booze, or B., have to spend upwards of $500 dollars to get a moving company to do it for you. Then, on top of all that, if you’ve been living in an apartment you have to make sure the place is spotless or risk losing your deposit. Over the last 7 years of my life I’ve moved 4 times, all of them terrible. The first three times, I went for option A, bribing my friends with a celebratory afterparty and feeling guilty the whole time. I thought that was bad enough. The final time, which was finally finished early this morning (THANK YOU SWEET BABY JESUS!) I foolishly went with option B, and I regret avery single second of it. Here’s why:

Let go back a few weeks in the blog to when I discussed paid, earned, and owned media, focussing specifically on earned.

Simply put, earned media accounts for brand exposure your company has receive through word-of-mouth. Whether it’s the content of your website or your social media channels, your customer service reputation or community influence, earned media refers to the recognition you receive as a result. This often comes in the form of mentions in the press, reviews  and recommendations on sites such as Yelp and Glassdoor, shares on social media sites, content you post in collaboration with other companies and more. Some of the benefits of earned media are that it’s the most credible (because it comes unsolicited from people not connected to your business), it’s transparent, and its long lasting. However, there are a few negative trade offs such as you not being in control of it. Take a look at the trainwreck that used to be Amy’s Bakery. Negative press killed that business (Not that it wasn’t deserved). Earned media is usually at the top of the funnel for lead conversion and is what gets people initially interested in your company.

After I signing the lease on my new apartment and letting the previous complex know I wouldn’t be renewing I began to take the steps necessary to ready myself for the move. The first step was seeking recommendations from both my current and previous complexes for moving companies who would pack and deliver everything in my apartment. Between the list of recommended from the two was a single shared preference for a company that I won’t bother listing, but long story short, I took the next logical step and did my own online research finding generally positive earned media across the board. Naturally, I decided I would use this company and made reservations, scheduling my itinerary for what would need to be done in terms of number of boxes needed, packing services, types of furniture to be moved, timeframe, etc. This was about a month ago. Fast forward to Monday morning, January 18, 2016 and entire the nightmare of a bad product not living up to the hype of good marketing and earned media. To start off with, I had prepared everything to be packed Sunday night and laid it all out in neat piles so that packing would be easier for the movers. I also called the moving company the morning of to confirm my order. My scheduled window for the movers to arrive and start packing was between 11:30AM and 2:30PM. Three hours is a ridiculous amount of time for an arrival window if you ask me, so imagine my frustration when the movers didn’t show up until 3:30 and casually brushed it off as if it was no big deal. Imagine my further frustration when they get up to my apartment and tell me that they didn’t know they would be packing all of my stuff as well as moving it. Granted, that last bit wasn’t their fault as we compared order tickets and they had clearly not been given the correct information on my order by whomever is responsible for delegating such things. From there things got worse. Because they didn’t know they were packing for me, they didn’t have boxes. Because they were an hour late “working another job that went over time,” they didn’t know if they had time to do mine because “the law prevents moving company employees from working more that 14 hours per day.” And because the universe usually finds a way to make things go from bad to worse, we had to wait an additional 30 minutes while the company manager slowly made his way to my apartment to inspect the situation and decide whether it could be done that day. Mind you, I had to be out by 4pm the next day when I had maids coming in to scrub the place down top to bottom. After it was decided that the job could be done, an additional 30 minutes passed while a second truck delivered the 40 boxes that I had originally requested. In that same time frame the cost of my move had to be recalculated from the original $550-$720 estimation to a new estimated range of $850-$1300 (JESUS CHRIST PEOPLE!). At this point I was too frustrated to care. I needed it to be done, so I grudgingly accepted my wallet’s fate 2 hours later. Would that that were the only hurdle along the way. In the 2 hours it took these guys to pack my stuff the tally of damaged items grew as follows: the legs of my antique dresser, a vase that a good friend of mine made specifically for me, 3 dishes, a wine glass (it’s supposed to be a set of four, not a set of three, you heathens), and my college diploma. Yep. you read that correctly. They dropped my framed diploma and the frame and glass broke in such a way that it ripped the actual paper. Lovely. So, now I have that to deal with. As if this weren’t bad enough, worse still was that I had to smile through it because I NEEDED it to be done ASAP. So, we get through this first bit and loading it all in the truck and it’s finally time to move it all to my storage unit (I’m couch surfing for 25 days while I wait for my new place to be readied. yay homelessness!). This part I can say went off without much of a hitch, probably because the movers were as tired of working as I was of watching after them to make sure no more of my stuff got damaged, and alas, 6 hours  and ~$1000 later, it was done and I was able to head to the nearest bar for a stiff drink. The lesson learned in my inebriated reflection? Something I talked about last week.

Marketing means nothing without a decent product. While the quality of his clothing line cannot be derived from simply watching DJ Khaled’s snapchat (which is why I bought a pair of his sandals. They’re super comfortable.), what cannot be argued is the vitality and success of his music. You can’t say you’re the best at something without having the proof to back it up and Khaled can do that. Over the last decade DJ Khaled has had anthem after anthem go platinum. These were all before he was on snapchat too. He is the living embodiment of what it means to have a top quality product before you can even start thinking of pitching it to the masses.

Let me repeat that for you. MARKETING MEANS NOTHING WITHOUT A DECENT PRODUCT! This company had everything going for them from a marketing standpoint: great online reviews on both Yelp and Google, top SEO results, fantastic word of mouth marketing from both my previous and current apartment complexes (I now feel like they get a cut for the referral), and seemingly good customer service…over the phone at least. So imagine the deep seeded disappointment I felt and continue to feel when the product/services I received failed to live up to everything that I had heard. This isn’t meant to smear the company in question, which is why I’ve refrained from naming them. Nor do I believe my experience is the standard at which they operate as is evidenced by the numerous positive reviews they have. It’s just meant to be an unfortunate anecdotal reflection on what i’ve been talking about over my last three posts.